For the first time in more than 20 years, the September edition of ALO news is being brought to you from the Bethel headquarters of ALO. Normally the operation shifts to Minnesota about October 1st but rising Covid-19 numbers throughout the Midwest made that a risky move for elders. Early October in Bethel features cooler days with freeze-up coming soon and rapidly darkening days. Fall colors are brilliant on the tundra, especially when you catch the morning light just at sun up in the back yard.

The colors were also good at the Angstman cabin. Most ALO news readers are well familiar with the front view, but here are the other three sides of the cabin in September.

Note that the lawn has no grass and requires no mowing. Most years it is filled with blueberries but this year was a rare down year for blueberries around the cabin because of a hot dry spell in the spring.

There were lots of bears this year. Here are some of the best bear shots.

This wolverine wouldn’t show his face to the trail camera but allowed two rare photos of his back side.

In 40 years of mountain visits, there have only been a handful of in-person wolverine sightings, and now two on the trail cam. Animals are a normal feature of the ALO News, but this month there is an abundance of shots to sift through. Rather than worry about which to choose, perhaps it works better to put a bunch on the page, remembering of course that no paper is being wasted by this effort.

There are two mandatory moose, both on city streets. The first was a video posted by Michelle Sparck, a former Bethel resident, who suggested she was a little tense as this big guy walked by her car.

The other moose gives folks outside of Alaska an idea how big these critters actually are, dwarfing a car.

This person was in for a little surprise on his porch.

And of course there are the youngsters. This musk ox calf defines cuteness.

Not sure if these owls are cute or homely but certainly something not seen often. And the drawing by Ada, who just turned two, is her rendition of an owl.

One of the better old photos of the month is downtown Ruby, Alaska in 1913. Ruby is an Iditarod checkpoint located on the Yukon River but it was an important transportation hub during the gold rush. This photo shows how the early mining towns resembled small towns across America despite their remote location. This street has more services than most rural Alaska towns have today. Goods arrived by river boat in the summer and dog team in the winter. Check the signs closely.

Back to the Wild

Speaking of rural Alaska, this article "Back to the Wild" posted by Craig Medred describes an Alaska bush story that’s worth reading - "As winter closes fast on Central Alaska, the family of short-lived, reality-TV star Duane Ose fears he has gone off to die in the homestead cabin that is no longer his in the foothills of the Alaska Range..."

Hopefully there will be a follow up on this tale. Heading in to spend a winter in the wild is a big undertaking, and it doesn’t sound like that pair is prepared. Medred is a former Minnesotan who used to cover Alaska dog racing and managed to offend a good number of the racers in Alaska at one time or another. He currently writes frequent online stories in the format of the one referenced.

Another writer who manages to stir things up a bit is Bethel’s city attorney, Libby Bakalar. She writes a blog called “One Hot Mess” and rarely holds back. She got crossways with the state of Alaska and ended up out of a job as Assistant Attorney General, but her new bosses at the City love her work. Here is a recent post she made.

Hopefully she has found her happy place as city attorney. Read her blog "One Hot Mess" here to be enlightened. Here is her invite: "You'll laugh. You'll cry. You'll feel better about yourself. I promise."

This photo is not the classic American dream come true story, but it is short poignant reminder of what can happen in this country.

More Republicans are speaking out about Trump and politics. There are an unprecedented number of Republicans speaking out in advance of the election this year. This guy, Steve Schmidt, who has worked to help elect his party members for many years, recently acknowledged that his career as a Republican campaign organizer is likely over. He may be wrong though because future politicians who observe his powerful work may still want him. He works with the Lincoln Project and if you haven’t seen their ads, you haven’t been paying attention. Trump recently took after him in his typical fashion and this was Schmidt's scathing response. 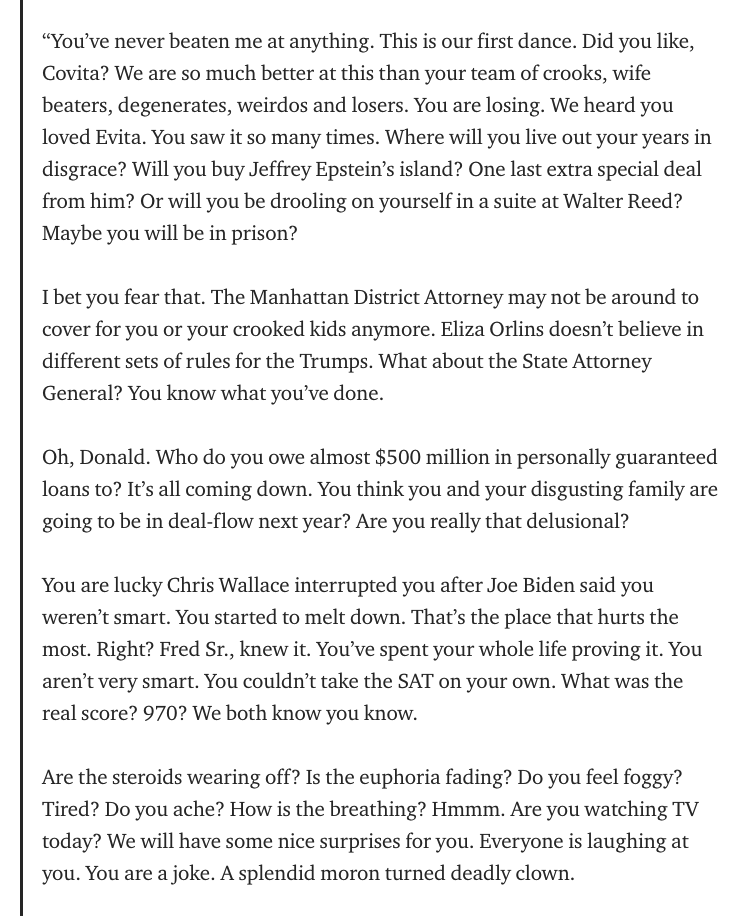 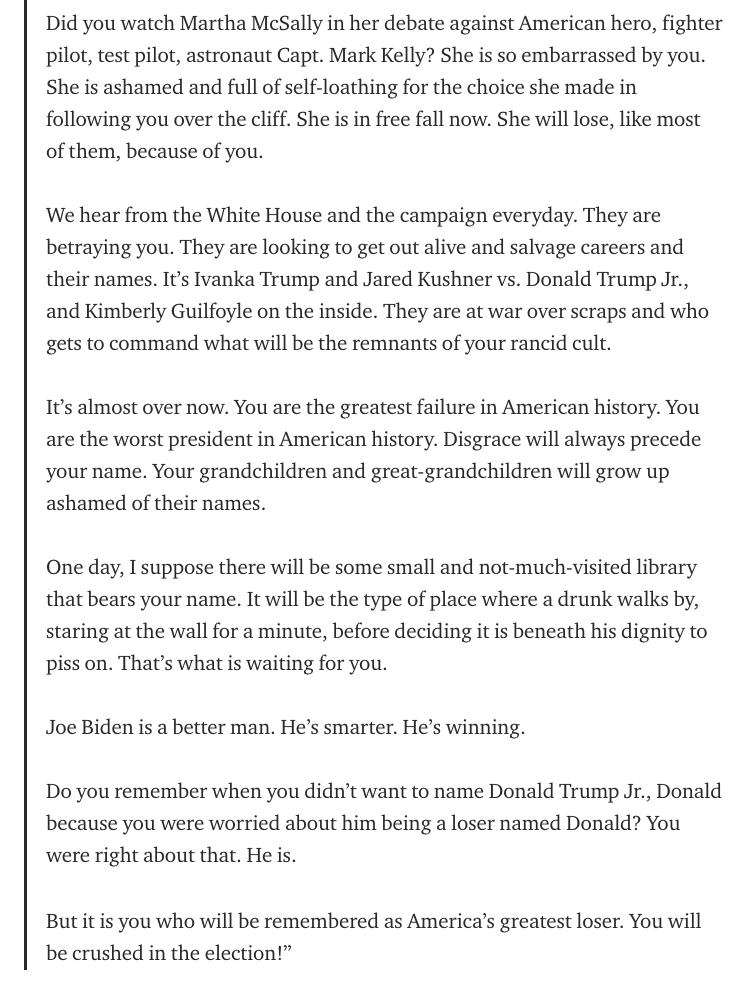 Of course there are also cartoons, the first three from Lamont Albertson, who is a regular here.

Jeff King posted this one.

Finally some thoughts about the campaign. For many years it has been known that there are more Democrats than Republicans in America, and many elections are decided by the folks in the middle. With that in mind, most astute politicos fashion their appeal to the moderates in the middle. That appears to be especially important this year where polls have been consistent for a long time showing that Trump has the solid support of about 40% of the population. It is also clear that most of those folks are not going to change their minds anytime soon. Thus, in order to win, it seems Trump has to do something to attract folks outside that 40% group. So why does he make his first appearance after his hospital stay on the Rush Limbaugh radio show? He chatted for 2 hours, and it is a fair bet that there were almost no listeners who were not already solidly supporting Trump. There are countless other examples of this behavior, which is often referred to as "preaching to the choir."

The last thought about the campaign concerns donations. Biden and other Democrats are taking in immense amounts of money in small online donations, easily surpassing Trump and the Republicans who favor gigantic contributions from billionaires. While it is unfortunate that so much money is spent on campaigns, at least it is comforting to know that common folks can compete with the billionaires in that area. Keep in mind that a $100 contribution does not earn special favors for the person donating, but anyone donating millions expects to have extra influence going forward, which is why billionaires got a giant tax break from Trump and an ultra conservative Supreme Court nominee with views not supported by a significant majority of voters.